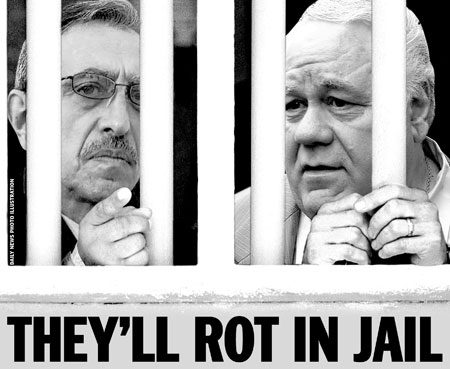 A federal appeals court Wednesday reinstated the murder convictions of retired ex-NYPD Detectives Louis Eppolito and Stephen Caracappa, which a Brooklyn judge had wiped out on a legal technicality.

The unanimous ruling from a three-judge panel of the Court of Appeals restores the life sentences handed Eppolito and Caracappa, who were convicted of eight murders as hit men for the mob.

“Thank God that a small measure of justice has been restored for the families of the victims,” said former Assistant U.S. Attorney Robert Henoch, who was on the prosecution team.

Judge Jack Weinstein, whose decision to throw out the racketeering convictions in 2006 shocked prosecutors and outraged the victims’ loved ones, left the Brooklyn federal courthouse Wednesday carrying a copy of the 70-page decision that reversed his ruling.

Eppolito, 60, and Caracappa, 66, have remained in prison pending the outcome of the government’s appeal.

“This isn’t over,” Eppolito’s daughter Andrea said. “We’re not done. My father’s not done.”

Eppolito’s estranged son Louis Jr. appeared ready to throw in the towel, saying, “My father and Steve made choices and will have to live with them.”

The two were convicted in April 2006 of selling their badges to Luchese crime capo Anthony (Gaspipe) Casso in the 1980s, passing the gangster secrets about informants and helping to whack some of them.

In vacating their convictions, Weinstein noted there was no doubt of their guilt, but he said the statute of limitations for racketeering had passed.

He said prosecutors failed to prove the conspiracy continued after the detectives retired from the force and moved to Las Vegas.

The appeals court determined that Weinstein’s narrow focus on the passing of secrets “as the be-all and end-all of the enterprise” wrongly disregarded evidence of their criminal activities in Vegas.

Leah Greenwald, whose husband, Israel, a jeweler, was kidnaped and whacked in 1986 by the dirty duo, said she’s “very pleased that these men will get the punishment they deserve.”