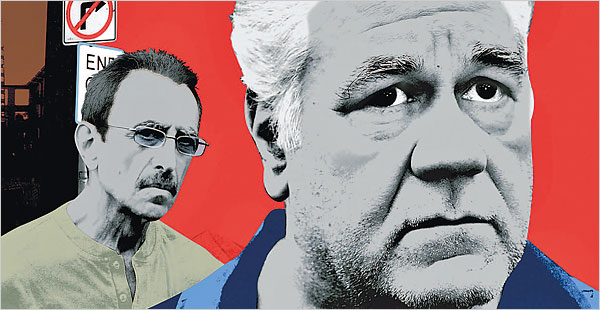 The phenomenon of Mafia nostalgia is so ingrained in the American consciousness, one might think Frank Costello and Albert Anastasia were among the founding fathers. In fact, our fascination with modern Italian-American organized crime dates only to the early 1960s, when the traitor Joseph Valachi first laid bare its internal structures and codes. Interest in the Mafia has proved far more enduring than the syndicates themselves, which have never recovered from the jailing of John Gotti and so many other godfathers in the 1980s and early 1990s. All we have left are Tony Soprano, the best work of Martin Scorsese and Francis Ford Coppola, and our memories. Ah, the bad old days.

The Mafia has been very good for Hollywood producers and newspaper reporters, which explains the media circus that surrounded the trial earlier this year of New York’s two infamous “Mafia cops,” Louis Eppolito and Stephen Caracappa, who today remain in jail even though a judge has vacated their convictions. The now-retired detectives, dragged from their gaudy Las Vegas old-age homes to face the tabloid pack, were shown to have funneled sensitive intelligence and actually carried out murders for the crazed Luchese family godfather Anthony (Gaspipe) Casso back in the 1980s. The whole episode felt plucked from another era, as if these were the last two American turncoats to be prosecuted for cold war espionage.

Any number of books and movie projects are said to be in the works, and the first, “The Brotherhoods: The True Story of Two Cops Who Murdered for the Mafia,” by Guy Lawson, a veteran crime reporter, and William Oldham, a former New York Police Department detective who helped break the case, has now arrived. The good news, at least for Mafia aficionados, is that Lawson and Oldham have this material down cold. They seemingly had access to every Police Department document, every recorded conversation and every exhibit employed to convict Eppolito and Caracappa.

The bad news is that it’s all here: every dull dinner between the two detectives and an F.B.I. informant, page after page describing a screenplay Eppolito once wrote, apparently every case Oldham ever worked. “The Brotherhoods” is a perfectly fine book that could have been much, much better had the authors only known when to clam up. One suspects that within this overstuffed, ultradense 511-page anvil is a lean, nimble 275-page claw hammer yearning to swing free, a sequel to breezy underworld page-turners like Howard Blum’s “Gangland.” It’s not just that Lawson and Oldham throw in the kitchen sink. Like Gambino soldiers gleefully raiding a Canarsie warehouse, they haul out a refrigerator, 18 microwave ovens, 82 dinette sets, 994 Viking ranges and, still feeling a tad light, the entire inventory of the New Jersey Turnpike Ikea.

Part of the problem is that “The Brotherhoods” is not one book but two. The first is a straightforward if exhaustive narrative of the case, presumably written by Lawson. After putting down the galleys for the 15th time, unable to thrash my way through thickets of paragraphs so dense I began looking for hobbits, I took a hard look at his prose. There is absolutely nothing wrong with it. His sentences are spare, his adverbs scarce, his name-pronoun exchanges are good, his transitions are functional if unspectacular. The trouble is Lawson’s use of detail. There’s a world of difference between “telling” detail and telling every detail. At one point I had to stop and shake my head when I realized he was actually explaining the brand name of a chair Oldham uses during a prison conference.

The second book really slows things down. This is Oldham’s lengthy interjections into Lawson’s prose, which come in paragraph after paragraph of quotation, sometimes five and six at a time. While Oldham’s views can be informative and entertaining, the effect is akin to a director’s commentary on a DVD film. Oldham strives to provide context, but too often serves up platitudes. To cite just one example of dozens: “In major organized criminal investigations there is not an obviously straightforward cause and effect. Conspiracies occur in parallel universes and timelines. What is the chronology of the crimes that are investigated? What happened? When did it happen? Where did it happen? Why did it happen?” This might be catnip for cops, but ahem, sir, could you please stop talking during the movie?

For those willing to wade through it, “The Brotherhoods” has its rewards. The authors do a stellar job of portraying the Police Department as a dysfunctional bureaucracy, making us see how Caracappa, who worked in the elite Major Case Squad alongside Oldham, was a much bigger fish than Eppolito, a blowhard toiling in deepest Brooklyn. They are adept at conjuring organized crime’s inbred world of social clubs and row houses; every cop in the book seems to have a cousin Joey “in the life,” and vice versa. Rarely have Mafiosi seemed like such losers as they do here, obese men in track suits debating whom to kill once they finish their ziti. Gaspipe Casso comes off as a cut above his knuckle-dragging peers, but his story was told just as well — and faster — in Selwyn Raab’s “Five Families.”

Of the two cops, the pathetic, porcine Eppolito — whose cinematic ambitions peaked with a goombah cameo in Scorsese’s “Goodfellas” — is the most vividly drawn, this due to his mind-bogglingly wrongheaded memoir, “Mafia Cop,” in which he boasted of his Mafia lineage, which included his father, Ralph Eppolito, known as Fat the Gangster, and an uncle, Jimmy the Clam. Caracappa remains a cipher throughout, a wary, watchful figure with the look, and apparently the personality, of an undertaker on downers. Both could have used additional reporting to flesh out their careers and back stories; there aren’t many clues in the text as to what a pro like Caracappa would see in a mook like Eppolito. But Lawson, presumably viewing Oldham as the Ken Jennings of criminalia, falls prey to the common trap of letting only the caged canary sing. Isn’t there anyone else who knew these two detectives?

The book also suffers from several factors out of the authors’ control. For one thing, they cannot tell the full story of what Eppolito and Caracappa actually did, because the two detectives have never publicly discussed, much less admitted, their crimes. So what we get is a narrative engine built around Oldham’s investigation. This is interesting if unremarkable material, in part because his probe was a whodunit only in its infancy. After Casso, in an abortive attempt to reduce a life sentence for murder, told prosecutors about Eppolito and Caracappa in 1994, the next 10 years of story line are purely an exercise in proving what the unreliable Casso claimed.

In the end, for all Oldham’s dogged work, the case is broken when Casso’s conduit to the cops, the aging fence Burton Kaplan, finally cuts a deal of his own after nine years in prison. The authors do their best to wring drama from Oldham’s jailhouse tango with Kaplan, but Kaplan is bland beyond belief. The narrative payoff, the eureka moment the authors spend 300 pages building up to, comes “after dozens of calls and six weeks of talking,” of which little is said. “I think we got a deal,” Kaplan’s attorney tells Oldham. Memo to: Ahab. From: Whale. I think we got a deal.

Bryan Burrough, a special correspondent at Vanity Fair, is author of “Public Enemies: America’s Greatest Crime Wave and the Birth of the FBI, 1933-34.”.